Reality TV star couple Todd and Julia Chrisley have been sentenced to prison for their $30 million fraud case.

The couple is famous for their reality show, Chrisley Knows Best which depicted their so-called picture-perfect southern lifestyle full of luxuries and whatnot.

A few reports suggest that their show and its spinoffs have been canceled now; however, according to Page Six, “There has been no official word from NBCUniversal on the cancellation.”

The verdict came five months after the celebrity couple was found guilty of fraud and tax evasion.

According to Daily Mail, “Prosecutors said they took out $30 million in fraudulent bank loans. The couple used the money to fund their lifestyle, even before they had become reality stars. Todd and Julia also used a production company to hide income from the IRS, lawyers argued.”

The duo’s accountant, Peter Tarantino, was also given 36 months in prison for fraud on his client’s behalf.

“During the emotional sentencing hearing on Monday, Assistant US Attorney Annalise Peters showed footage of the Chrisleys bragging about spending hundreds of thousands of dollars on clothes, from their 30,000-square-foot home, while avoiding taxes and in the middle of bankruptcy,” Insider wrote.

Earlier this year, during the trial, the convicted couple submitted a false document in court and convinced their friends and family members to lie while testifying under oath during the court hearings.

“The Chrisleys are unique given the varied and wide-ranging scope of their fraudulent conduct and the extent to which they engaged in fraud and obstructive behavior for a prolonged period of time,” the prosecutors wrote.

The trial has been dramatic from the very beginning, including Todd’s former employee, Mark Braddock’s testimony in court. The employee-turned-lover shocked everyone by confirming that he had a year-long affair with his boss, 53-year-old Todd, in the early 2000s.

“They were involved with each other while they were both married to their respective wives,” per Daily Mail.

“Braddock sensationally turned against his ex-lover and business partner on the stand when he told the jury that he had not only been witness to the Chrisleys’ crimes but had helped to commit them.”

The tabloid added, “His testimony also saw him confessing not only to his role in the Chrisleys’ years-long fraud but to his infidelity, which he is said to have kept hidden from his wife for years before revealing it all to the world on the stand. Braddock was granted immunity in return for testifying.”

PEOPLE also reported that their sentencing was delayed from October 6 to November 21 because the attorneys found out one of the witnesses ‘lied’ on the stand.

According to Variety, Todd’s defense lawyer asked the jury for a reduced sentence by maintaining that the errant taxes had been paid. Attorney Bruce Morris also argued that many people rely on the couple for their income, including the ones involved in their reality TV show.

“The scores of people who are employed in the production and filming of the Chrisley television shows will be harmed when he is incarcerated,” wrote Morris.

What are your thoughts on this case and the verdict? Let us know in the comments. 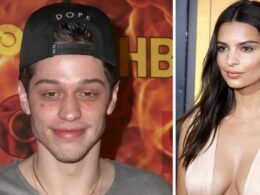 A New Romance: Pete Davidson is Dating Emily Ratajkowski amid her Divorce