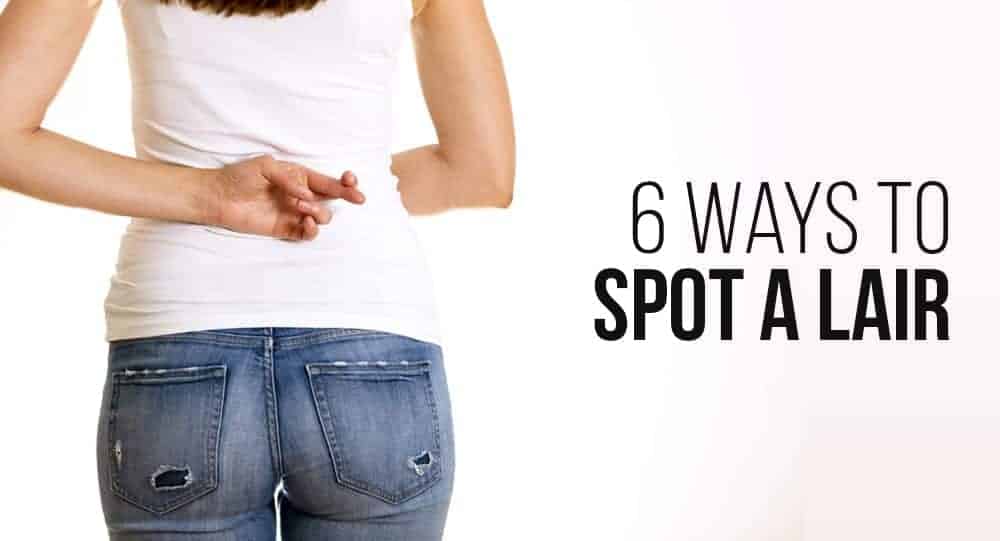 6 Foolproof ways to spot a liar

Do you see it happen, or are you unaware of it happening around you? When people lie, they show a lot of signs, signs that are easily recognized by some people, while others miss them. When you’re in a relationship (with someone who’s a liar), you need to be on your guard, save yourself from all the hurt and open your eyes.

Here are six ways to spot a liar.

6. Do they instantly change the topic?

When someone wants to hide something from you or lie to you, they’ll try changing topics very frequently.

When you try talking about something that tells them that they’re going to be caught if they keep talking about it, they’ll smoothly ignore that topic and move on, showing a lack of interest in it. That’s the first thing you should notice when you’re catching a liar. This happens because they’re just not comfortable talking about it, they think they’ll accidentally spill the truth, hence the topic keeps changing.

5. Do they hide their phone?

This is happening more and more frequently with people nowadays. You might say that every relationship needs a healthy level of privacy and personal space, yes it does. I’m not saying that you should tell each other your passwords, that’s too extreme and happens because of insecurities.

But people who have something to hide will never let you touch their phone. This happened to a friend of mine recently (actually two days ago.) She was going out with this guy who she suspected of flirting with other girls through messages.

Whenever she asked him to give her his phone (to take photos), he would bluntly refuse, which increased her suspicion. One day, she just snatched it from him, and as soon as she had it in her hand, a message comes in from a girl, sending him very raunchy photos. Needless to say, that relationship was over then and there.

When you’re transparent with your partner, you don’t care about any of these menial things. I hand my phone to my girlfriend all the time, to answer my calls or to just read out a message while I drive, she does the same too, because I know I have nothing to hide.

4. Do they start stammering when confronted?

Someone who lies is going to have so many thoughts in his/her head before saying a word that they mix those words up and start stammering a little. A lot of “umms” and “errors” will start flowing, and they’ll have a tough time saying something to save themselves from being caught.

If you doubt them of something and you confront them about it, do they usually answer your question, or do they think a lot before saying a word and eventually start stammering? This is an easy one to catch.

3. Do the stories keep changing?

When someone tells the truth, they know what they’re talking about. They don’t mix up the names, the places, the time, etc. But when someone lies, their stories may vary every time you hear it. Because when someone speaks naturally, they don’t need to rehearse anything, and they talk.

When someone tries to make up a story to hide a lie, the story is going to be very well-rehearsed and won’t seem natural at all. Also, notice the facial expressions because they change very frequently when someone is lying.

2. Do they become extremely defensive?

A person who lies is so scared of being caught that every defense mechanism kicks in when they’re confronted about it. If you face them with something that’s bothering you, and they suddenly become too defensive, it means they’re hiding something, and you’ve been lied to.

10 signs you should trust the guy you’re with

Someone who’s truthful will never need to be defensive while explaining themselves to you because they genuinely care about you and can’t see you suffer, while someone who lies is going to be very selfish when it comes to feelings so don’t expect any care when confronting them and prepare for a whole lot of defense.

1. Has their behavior changed over the weeks?

When someone lies to you, they will never act the same around you until they tell you the lie. They’ll be very uneasy around you, usually very quiet or down, it’s because deep down inside the fabrication is continually reminding them of its existence.

They can also be more short-tempered during that time, they may even distance themselves from you to feel a little better, but if they genuinely and honestly love you, they’ll eventually tell you. Otherwise, you’ll finally find out because no lie stays hidden forever.

Question of the day

Have you been lied to? Leave your answers in the comments below. As always, stay blessed and keep the love alive!