A little act of kindness goes a long way.

This is the story of a High school kid who helped an elderly blind lady cross the street in College Hill. The old lady was struggling to press the button to cross the road.

According to WLWT, 15-year-old Dontarius Caldwell and his younger sister, Diamond. Both teens were waiting for their bus across the road.

While Dontarius was playing video games on his phone, his sister Diamond noticed an elderly lady struggling across the street to press the button for the crosswalk sign.

She told her brother about the woman and asked him to see if she needed any help. So, Dontarius stood up and went to the lady across the road to ask her if she wanted his help.

“I told Dontarius that I think she blind, you should get up and go help her, and he got up and went to go help her cross the street two times while I waited for the bus to come,” she told the news outlet.

The freshman kid from Cincinnati, Ohio, approached the woman and asked if she needed some help.

He took the woman’s hand and helped her cross the street. The teen didn’t know that while he helped the elderly lady, he was being captured on camera.

An onlooker named Mike Garibay was watching the whole scene from some distance; he took a picture of Dontarius holding the woman’s hand and helping her cross the street and uploaded the picture on his Facebook.

The picture went viral, and it was liked and shared by thousands of people on social media.

“This is wonderful, there is some good in everybody, may God bless this young man…Say Amen everybody,” another wrote.

“We all need to hear/see stories like this – to remind us that there is good in the world and how we should treat each other. May God bless this young man over and over,” another comment read.

“Awesome…glad to see the young kids being exposed for something positive instead of negative, keep doing wat u do young man,” wrote another.

“Thank you to his parent for teaching him how to be Respectful, Helpful and most of all Kind! He is an example of how ALL young people should act! This young man will go far in life. Thank you to this young man, because you are the Example,” someone commented.

Speaking to News 5, the brother and sister said what they did wasn’t special; they were just raised to do the right thing.

“If you be kind, what happens (to them) happens to you,” he said.

The high schooler was given a key to his school as a reward for his act of kindness.

What are your thoughts on this story? Let us know in the comments. 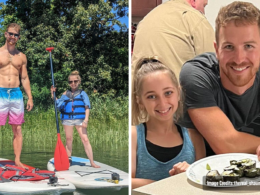