He is Over The Moon AGAIN!

Former astronaut Buzz Aldrin gets married for the fourth time.

Aldrin, 93, announced the happy news to his fans and followers via Twitter.

“On my 93rd birthday & the day I will also be honored by Living Legends of Aviation I am pleased to announce that my longtime love Dr. Anca Faur & I have tied the knot. We were joined in holy matrimony in a small private ceremony in Los Angeles & are as excited as eloping teenagers,” he wrote.

The astronaut legend, the second man after Neil Armstrong to land on the moon, also shared two photos with his new bride.

The photos showed Buzz posing along with his new blonde bride as she looked stunning in her white bridal gown embellished with beautiful rhinestones.

According to Daily Mail, Dr. Faur is a 63-year-old Chemical Engineer from the University of Pittsburgh.

“She currently works as the Executive Vice President of Buzz Aldrin Ventures LLC, with her LinkedIn page listing her as having worked for the company since 2019.”

“She has a Ph.D. in chemical engineering from the University of Pittsburgh and at one point was the treasurer for the California Hydrogen Business Council.”

The engineer and fighter pilot who made three spacewalks as pilot of the 1966 Gemini 12 Mission had been married and divorced thrice before his new marriage.

He first married Joan Archer in 1954, with whom he shares three children – sons James and Andrew and daughter Janice. The couple ended their marriage in 1974.

Then he tied the knot with Beverly Van Zile in 1975. However, the duo remained together only for three years and parted ways in 1978.

After his second divorce, Aldrin decided to stay single, and he did for the next ten years.

In 1988 he met his third wife, Lois Driggs Cannon, and fell in love with her. The couple got married the same year and remained together for 24 years. In 2012, Buzz divorced Driggs.

The famous astronaut has one grandson from his daughter Janice, three great-grandsons, and one great-granddaughter.

The entire world remembers Aldrin for saluting the American flag on the moon’s surface during NASA’s historical Apollo 11 Mission.

“He retired from NASA in 1971 and in 1998 founded the ShareSpace Foundation, a non-profit organization to promote the expansion of crewed space exploration.”

What are your thoughts on Buzz Aldrin’s fourth marriage? Let us know in the comments. 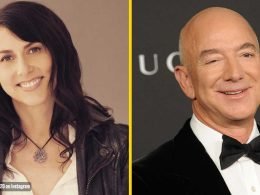 The Interesting Story Surrounding Zendaya and Her Parents

Blake Lively & Ryan Reynolds are expecting their 4th Child, Congratulations to the Super-couple!