Chrissy Teigen and John Legend are introducing their new baby to their fans.

Last week Legend announced that he and Chrissy were blessed with a third baby.

“What a blessed day,” he shared the news during a private concert on Friday night.

“The singer added that while he “didn’t get a lot of sleep,” he “feels energized” after spending “a lot of time” at the hospital,” People Magazine reported.

Many attendees of the musical night took to Twitter and shared the news with others.

“@johnlegend just told us he had a baby this morning #congratulations,” one user wrote on Twitter.

However, the All of Me singer didn’t reveal the gender of the baby.

While fans got really excited to learn the good news, they were still curious if it was a baby girl or a baby boy.

Finally, a week later, the couple reveals the gender of their newborn.

Both Chrissy and John uploaded an adorable photo of their three children on their Instagram accounts.

“She’s here! Esti Maxine Stephens – the house is bustling and our family could not be happier. Daddy sheds nightly tears of joy seeing Luna and Miles so full of love, and I am learning you still need diapers with a c section!? We are in bliss. Thank you for all the love and well wishes – we feel it all! X,” Teigen wrote.

The couple is already parents to a 6-year-old daughter, Luna, and a 4-year-old son, Miles.

John, 44 also shared the same photo on his Instagram and penned a sweet caption,

“On Friday, we welcomed Esti Maxine Stephens to our family, and our house is overflowing with love and joy.” He said. “I’m in awe of Chrissy’s strength and resilience and I’m so thrilled to see how Luna and Miles embrace their baby sister. I’m so, so grateful, but that doesn’t seem like a big enough word…”

Both Chrissy and John’s comment sections were filled with congratulatory messages.

“We can’t wait to meet her!!!” Kris Jenner commented.

“CONGRATULATIONS!!!!!!!!! You guys deserve all the best things in life, friend!” another pal commented.

“Welcome, Esti!! You picked an incredible family to join. Love love love you and your mama and papa and sister and brother and your grandparents and all your furry family too,” someone wrote on Legend’s Instagram post.

In August 2020, the couple announced their third pregnancy, but it didn’t end well, and they lost their baby boy 20 weeks into the pregnancy.

According to Daily Mail, “She later revealed that her late son’s passing was the result of a life-saving abortion, not a miscarriage as she originally stated.”

“She explained that she made the ‘difficult decision’ to terminate the pregnancy after coming to terms with the fact that she nor Jack would likely survive.”

The Hollywood Reporter wrote that the model confessed during an interview, “Let’s just call it what it was: It was an abortion. An abortion to save my life for a baby that had absolutely no chance. And to be honest, I never, ever put that together until, actually, a few months ago.”

In February 2022, the American model announced her new pregnancy through Instagram.

“I wanted to let you guys know I’m balls deep in another IVF cycle to save as many eggos as I possibly can and hopefully make some strong, healthy embryos. I honestly don’t mind the shots…they make me feel like a doctor/chemist…but the bloating is a bitch, so I humbly beg you to stop asking if I’m pregnant because while I know it’s said with excited, good intentions, it just kind of sucks to hear because I am the opposite of pregnant!”

What are your views on this update? Let us know in the comments. 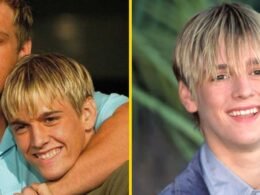