Eva de la Caridad Méndez, professionally known as Eva Mendes, is an American actress, model, and fashion designer who began her career in the late 1990s.

The Fast and Furious alum recently sat in an interview on Channel Nine’s Today show and accidentally admitted that she and her longtime boyfriend, Ryan Gosling, have gotten married.

“Everyone is so welcoming here, and my husband Ryan is here, and we are having the best time,” she said.

According to Elle Magazine, “The comment follows a post on Instagram of her inner wrist tattoo, that reads ‘de Gosling,’ and which her followers took to be a reference to the tradition of adding a husband’s last name to one’s own, using ‘de’ (‘of’ in English). So, ‘de Gosling’ translates to ‘of Gosling.’”

Mendes also appeared on an episode of Australia’s Kyle and Jackie O Show and hinted that she and the La La Land actor have already tied the knot.

“There’s a rumor that you guys might have secretly tied the knot. Is that true?” host Brittany Hockley asked.

“But who says we weren’t already? I like to keep it all mysterious. I’m a very mysterious woman,” Mendes replied.

Speaking about her tattoo, Eva said, “I do have a tattoo. It’s just a press on…no, it’s not a press on. But I got it years ago. I posted a picture and I’ve gotten a lot of funny questions.”

The love birds first met in 2011 on the set of their film The Place Beyond the Pines. During the movie’s filming, Ryan and Eva hit it off and started spending quality time together.

“Their on-screen chemistry translated to their personal lives when, shortly after filming wrapped, the two were spotted getting cozy at Disneyland and sharing a romantic kiss in Paris,” PEOPLE reported.

In 2014, the couple welcomed their first daughter Esmeralda and their second daughter Amada was born two years later, in 2016.

In 2020, the Hitch star spoke on an Australian Radio Show and revealed that she didn’t want kids until she fell in love with Gosling.

“I was lucky enough to work my bum off for 20 years,” she added. “I never wanted babies before until I fell in love with Ryan, and it kind of worked out to where I was 40 and having my first baby. I think I was 42 for the second one, so it worked out in that way that I had a career and then I change my focus to my family.”

In April 2020, the fashion designer addressed her fans’ concerns about keeping her relationship with Ryan extremely private and wrote on social media,

“I don’t talk about Ryan and all the wonderful things he does as a father because I keep that part private,” she penned. “I feel it’s best that I continue to disclose what I’m comfortable with but not involve him or my kids too much. It’s not about being cagey or weird, it’s just about staying private in a public space. Does that make sense? Hope so. Because this is my honest answer.”

Thoughts on Eva and Ryan’s relationship? Let us know in the comments. 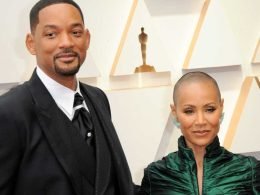 “I was never pushed down the stairs by Johnny Depp,” Kate Moss tells the jury in Johnny Depp’s trial