Gwendoline Tracey Philippa Christie, famously known as Gwen Christie, is an English actress best known for her role in HBO’s Fantasy Drama Game of Thrones and Star Wars Movies, The Force Awakens, and The Last Jedi.

Her notable projects include The Sandman, Wednesday, The Hunger Games, Top of the Lake, In Fabric, The Darkest Minds, and Flux Gourmet.

Recently, the 44-year-old British actress spoke to Entertainment Weekly and said her role in the Netflix comedy-horror drama series Wednesday made her feel ‘beautiful’ for the first time on screen as she had all the freedom to experiment with her character and create what she wanted.

“It is the first time I’ve ever felt beautiful on screen. I cannot express my extreme gratitude more heartily to Tim and Colleen and our hair and makeup team,” she said.

According to Gwendoline, director Tim Burton gave her full freedom to create her own character. “He said, ‘You can do whatever you like with the character, feel free to make it whatever you want, and we’ll keep talking about it.'”

“What kept coming to me was this idea of this Hitchcock-style heroin, this screen siren, that maybe that young woman would look to our mystic portal, the cinema, to be an incarnation of her fantasies,” she added.

“And weirdly, Tim had exactly the same idea, and so did [costume designer] Colleen Atwood.”

The Game of Thrones star, who played the iconic role of Brienne of Tarth in the blockbuster drama series, revealed that this is the first time in her career that she has felt more ‘feminine.’

Talking about her costume designer, Colleen Atwood, Gwen said she is an absolute legend who knows her job too well.

“Colleen Atwood is rightfully a legend, and what she does is close to witchcraft in terms of transformation. It is an honor of my life to work with Colleen and to work with Tim.”

The Hunger Games alum plays the role of Larissa Weems in the series, a strict and protective principal of Nevermore Academy. She is also a shape-shifter whose character was inspired by Alfred Hitchcock’s films.

“This idea kept coming to me of Larissa Weems being someone who was an outcast, who went to a school for outcasts, that was always second best and was always in Morticia’s [Catherine Zeta-Jones] shadow,” said Christie.

She concluded her interview with Entertainment Weekly by saying that this role was important to her as it allowed her to create her own fate.

“I wanted to push that idea. I like to transform into characters and people that are very far away from myself and I would never be cast as this part. It was an opportunity to create that and to inhabit that sort of impenetrable, imperious character with that classic idea of femininity.”

“But whereas Hitchcock heroins tend to have all sorts of trauma being exacted upon them, for this to be a woman who was in charge of her own fate, who was ruthlessly ambitious and who was willingly putting herself into dangerous and extreme situations, was exciting to me.”

What are your thoughts on this news? Let us know in the comments. 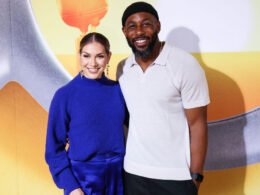 Adam Levine Accused of Cheating on his ‘Pregnant’ Wife with Instagram Model: ‘He Wants to Name His Baby After Me’