HomeStoriesKaren screams at the woman for flashing her bra while hanging from park bars.
2 minute read

Karen screams at the woman for flashing her bra while hanging from park bars.

Getti Kehayova went to the park in Las Vegas with her family recently, and while they had a great time, it got interrupted. Getti, who holds the Guinness World Record for spinning the hula hoop upside down, was criticized by an angry mom who complained she looked half-naked, showing her stomach and sports bra.

Getti Kehayova (L) was left confused when an angry mom said she flashed her sports bra in a park.

A video showed the stranger screaming at Getti as she worked out.

A stranger came over to the 43-Year-Old and started yelling at her about her obscene outfit. Getti’s shirt slipped down, revealing her white sports bra at the bottom. Getti recorded the confrontation on camera and uploaded it to TikTok, which has gone viral.

Getti was practicing her skills on monkey bars upside down.

Before yanking off her hula hoop, Getti’s stranger said her outfit was obscene.

During the clip (made private), Getti is wearing a white tank top and running shorts at the park, and gravity is the only reason her sports bra is showing. A mom (unidentified) who was pushing her kid pointed at Getti’s top as she slid down the monkey bars.

Guinness World Record holder in hula-hooping, 43. You can watch one of her clips here:

“Everybody here sees this!” There you are, half-naked. It’s a place for kids to play”.

“Everyone around here sees this!” That’s half-naked right there. “There are kids here.” The woman screamed. So Getty told the woman to back off while she was hula hooping. She said: “Watch yourself.”. She kept ranting, saying: “This is a place for family.”. “You can’t be half-naked up there.” She asked Getti’s husband, Michael: “Are you okay with this?”

When the stranger got mad at the local man filming, he yelled at him and told him to mind his own business.

The woman asked why Getti was wearing revealing clothes, and Getti said she was working out.

She tried ignoring the stranger, but when she saw her son videoing her hula hooping, she griped about everyone being on TikTok. When she finally grabbed Getti’s hula hoop, she threw it to the ground, forcing her off the monkey bars. She yelled at the guy filming, saying it wasn’t his business.

The woman threw Getti’s hula hoop into a lamppost and said, “Let me show you what you can do for a TikTok.”

There’s no word on what triggered the stranger’s outburst, but Getti admitted the encounter shakes her.

Getti and her husband left the scene with their son after giving up on disputing with the woman. Getti shared the video with her followers, saying the confrontation still shakes her. Yet, the video has been viewed over 3million times and got comments from around the world.

Getti said in the comments that the out-of-no-Neath confrontation wasn’t funny. 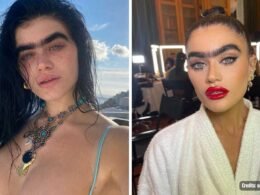 TikTok Mom Called Out Boomers For Not Respecting Boundaries