This is the story of a 21-year-old young woman from Kenya who married a man almost three times her age and is in a happy relationship with him now.

Vanessa, popular on TikTok as ‘VannyBrad,’ shared her story with her followers on TikTok and received many negative comments from fellow users regarding the huge age difference between her and her husband, Brad.

The Kenyan native married Brad, an American man, almost a year ago, and she keeps posting videos on TikTok. But commenters post negative remarks whenever she shares an update with her husband on the video-sharing platform.

So, recently on her first anniversary, Vanessa decided to call out her haters and advise fellow young women never to go after love because of ‘age.’

The 21-year-old has more than 1 million followers on TikTok and also regularly shares updates from their personal life on Instagram.

Recently, Vanessa shared an Instagram Question/Answer session on Instagram and shared that when she fell for Brad, she talked to her parents about it and told them she wanted to get married to him.

The Kenyan native added that her parents supported her in her decision and didn’t make an issue about his age.

“My parents supported me throughout every life decision, and when it came to the most important decision of my life, they made sure I stayed happy.” She wrote on her story.

“It wasn’t hard to talk to them, and they knew I was old enough to make my own decisions.” She added.

When a follower asked Vanessa if she did something extra for her American lover to make him serious with her, she replied, “Nothing. It just happened because we love each other.”

On her first anniversary, Vanessa shared a romantic video on her Instagram and wrote, “Our love is what’s keeping us going, Amor. Let’s keep shining more and more.”

The couple’s latest TikTok video went viral with 1.5 million views and received hundreds of comments. While some people sided with her and showed their support, many others said that Brad’s money attracted her to him.

“Age is just a number what matters is happiness,” one user commented.

“Age is just nothing happiness and peace of mind matter,” another said.

“As long as you’re happy,” wrote a third.

Meanwhile, many didn’t hesitate to mention that money plays a significant role in modern-day relationships, and age does matter.

“Phrase it ‘when u love money someone’s age doesn’t matter’ money is money,” one wrote.

“The way money can change everything into love, I wonder,” a second commented.

“My sista it is money that you love, where there is money, nothing is impossible or in your words, ‘matter’ lol,” a third penned.

“Depends, for me I would love my kids to grow up with their dad still young and energetic,” someone commented.

Do you think age matters in a relationship? Let us know your views in the comment section. 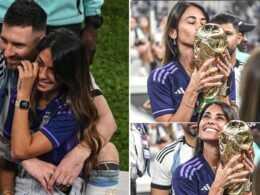