HomeAll About WomenHow To Flirt With A Girl Over Text?
6 minute read

How To Flirt With A Girl Over Text?

Have you ever found yourself wondering about how to flirt with a girl over text? Sure, you know that texting is one of the most common and popular tools for communication now. However, it’s an entirely different ballgame from when you’re just conversing with a woman in person. There are just different dynamics there, and it’s not going to be the same.

You might even be flustered at the idea of having to flirt with someone through text. That’s okay. There are just some guys out there who are better at flirting in person than they are through text messages. With that, you have to adjust.

Here are a few ways in which you can flirt with a girl over text:

1. Do a Callback Text

2. Incorporate Humor into Your Conversations 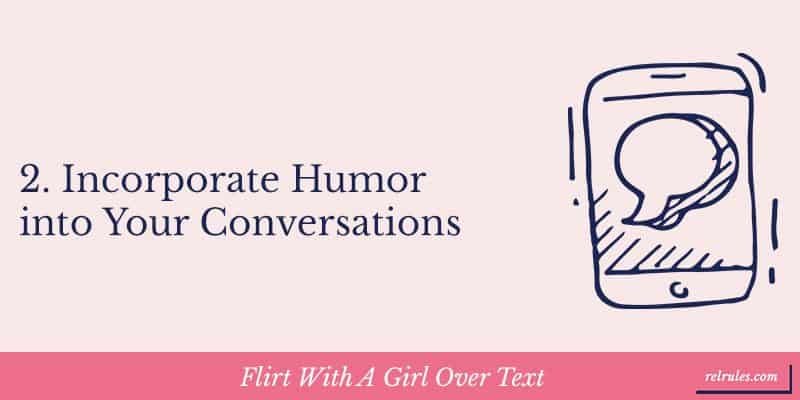 Girls are always going to love a guy with a good sense of humor. So, whenever possible, try to inject a lot of humor into the way that you converse with her. Also, if the two of you have a compatible sense of humor, then that’s a good sign for your potential relationship. It’s always good when the two of you can laugh at and about the same things.

Of course, you’re flirting with her. Naturally, you want to inject a bit of romance into the way that you communicate with her as well. However, if you’re just starting and getting to know each other, then you might want to take it easy. Don’t be so overt. But don’t hold back too much either. She has to know that you’re seriously interested in her.

4. Throw a Few Compliments Her Way

Don’t be afraid of throwing a few compliments her way now and then. After all, you don’t exactly want to be keeping it a secret that you like her. Also, it’s going to show her that you’re paying attention to her personality and that you’re genuinely interested.

5. Discuss Her Past Achievements

One great way to get her to start talking about herself is when you ask her about what she’s achieved in her life. Of course, this might require a little bit of digging and fishing on your part. But it’s always nice when a girl feels like you’re genuinely interested in what her life has been like for her. She’s also going to love opening about things that she’s proud of.

6. Ask About Her Interests

One of the best ways to get her to be the one to carry a conversation is when you ask her about her interests. Try talking to her about her hobbies or ask her questions about what her job is like. This way, you are initiating the conversation, but she’s the one who is pushing it forward. Also, make sure that you’re asking the right questions here and that you’re responding accordingly.

Don’t be afraid to just talk about what your day is like. You don’t always have to be discussing the deep and personal stuff. You can also just ramble on about random things that happen during your day. This is an excellent way of keeping things light and casual with your conversations.

8. Get Flirty with Her

If you feel like you’ve reached a stage wherein the two of you can just be comfortably flirting with one another, then don’t be afraid to be a little more forward with your text messages. You shouldn’t hesitate to bring a little heat to your texting when you know that you’re both ready for it.

9. Allow Her to Initiate the Conversation

If possible, try to let her be the one who initiates the conversation. Give her some space to breathe by not texting her every single day. Then, see if she will be the one who initiates. If she doesn’t, don’t be afraid to start things back up again. This is just so the two of you don’t end up oversaturating one another with your constant texting.

Always refrain from mere one-word replies. Always make sure that you reply with real sentences and phrases. No. Mere emojis will not suffice either.

11. Ask if She Got Home Alright

If you don’t have the opportunity to see her home after your date, then do the decent thing by texting her if she has gotten home alright. This is great for two reasons. For one, it shows her that you care about her and that you’re concerned for her well-being. Also, it allows you to text her and initiate another conversation with her.

Consistency is always key here. You don’t want to end up as the guy who just can’t seem to be consistent. After a while, she isn’t going to be enticed to entertain you anymore. You have to make sure that you don’t give her any reason to be turned off by you. This is why you want to maintain consistency when you’re trying to get closer to her, primarily through text.

As you’re getting to know a girl, you must understand the art of gradual progression. Sure, you might be keeping things light and fun at the start. However, the more that you get to know one another, you have to slowly transition towards having conversations that are deeper and more serious. This is the only way the two of you can grow more intimate with one another.

You don’t want to be revealing too much about yourself too quickly. This is why you want to keep things a little mysterious as well. You want to give her just enough information about yourself to get her interested. But you also want to withhold some of that information so that she is more enticed to keep on coming back for more. Add a little air of mystery to the way that you carry yourself. But don’t do it too overtly to the point that it becomes annoying.

15. Talk About Your Passions

It’s always great when you have someone with whom you can discuss the things that you are most passionate about. Also, when you talk about something that you’re genuinely passionate about, you will come off as very knowledgeable and eloquent. This is going to play well in your image. However, be careful that you don’t hijack the conversation to the point wherein it’s just you who is talking.

Sarcasm is one thing that doesn’t play well when it is done through text messages. Keep in mind that she can’t necessarily hear the tone that you’re using when you text her. So, even though you might be sarcastic, she would have no way of knowing that. You can save yourself from a lot of awkward moments if you just keep the sarcasm to a minimum.

Make sure that you don’t write novels when you’re texting her. Someone’s words are not bombarding part of the appeal of texting. Make sure to cap your text off at around three lines per text bubble. Anything more than that might be pushing it. You don’t want to be exhausting her eyes and mind by having her read an entire novel.

When you get good at flirting through text, there is a good chance that you will become addicted to it. You have to make sure that that isn’t the case. After all, you don’t want to be guilty of doing too much of a good thing, right? You want to make sure that you know your limits. Also, you want to save some conversations for when you meet up in person.

Somehow, even when it’s just through text message, a girl is going to be able to tell whether you’re honest or not. So, you just have to make sure that you’re truthful. There’s no point in lying anyway. If you want to be with her for the long term, you have to be honest, even at the start. You would never want to start a relationship off with lies.

Does this make sense? Do you have any tips on how to flirt with a girl over text? Talk to me in the comments below!

Read This If You Find Yourself Feeling Jealous Of Other Women