HomeAnswersWhat Does it Mean When a Taurus Man Ignores You?
2 minute read

What Does it Mean When a Taurus Man Ignores You?

Taurus, the second sign of the Zodiac – the bull. It’s an Earth sign, stays grounded and steady. A Taurus man is ambitious, hard-working, creatively crafty, intelligent, and dominating. When a Taurus man ignores you, he will always have proper reasoning behind it. And when the time comes when he opens up about it, he’ll explain exactly why he did what. It’s one of his traits; he will be open about how he’s feeling inside. Here are a few common reasons.

Five reasons why a Taurus man is ignoring you.

One thing a Taurus man won’t tolerate is cutting work to spend it with family or friends. He’s not going to indulge in texts or calls while he’s at work, he’s going to be very serious about it since day one. He’s an ambitious man who needs to keep moving up in the world, and he’s not going to slow down. So if he’s ignoring you because of work, let him work and talk to him when he’s back. 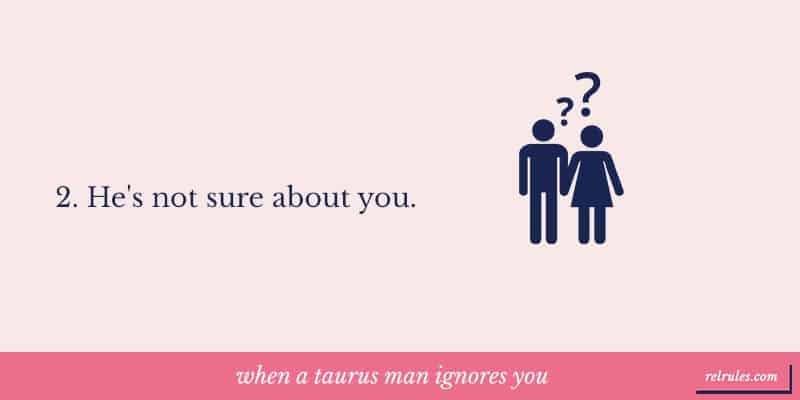 When a Taurus man is unsure about something, he’s not going to talk about it until he figures out a proper solution for the situation. He is a very well-planned person, and he’ll take his time and due process to come up with a way to fix himself on his own. If he’s not sure about you two being together, he will most probably ignore you until he becomes sure about whether to take it forward with you or tell you it won’t work out.

Taurians are amazing strategists. When they’re in their thinking process, they’re going to give very little attention to everyone else. They are problem solvers; they strategize ways to win battles and business meetings. That’s how their minds operate. Taurians also make for right Sapiosexual partners because of their sheer intellect and will.

When a Taurus man isn’t ready, he’s not going to talk about it until he is. He’s a perfectionist; he will wait as long as it takes. He is going to get back to you when he’s ready in his mind. To deal with this, you can approach him with a simple conversation about how your time is as important as his. Because he will respect your time.

It could also be a genuine possibility that he had gone through a recent breakup. Something that devastated his feelings and hopes. He’s going through his process of dealing with this, and he’ll mostly ignore others while he’s getting better in life. He will, one day, come back to being his healthy and fantastic self. But until then, it’ll be a little hard to approach him. But, if you’re kind enough, he is bound to reciprocate with kindness – a Taurus man will never ignore a kind gesture.

Have you been with a Taurus man before? Talk to me in the comments below!

The Biggest Personality Flaw That Your Zodiac Sign Has (And You Would Never Admit it!)