HomeAnswersWhat Does it Mean When a Cancer Man Ignores You?
2 minute read

What Does it Mean When a Cancer Man Ignores You?

Cancer is the fourth sign of the Zodiac. A Water sign that’s represented by the crab. Cancer men are most widely known for their nurturing natures and how they take care of the ones who matter to them. Cancer men are the most loving and caring partners out there. When a Cancer man ignores you, it has an emotional reason behind it. Cancerians don’t ignore anyone unless they’ve done something that ticked them off. Since they’re so loving, they show visible signs of ignoring you.

Four reasons why a Cancer man ignores you.

1. You hurt his emotions.

Emotions are vital for a Cancer man; he loves being in love. When his feelings get damaged or hurt, he won’t be able to deal with it quickly. He may start ignoring you to help him deal with the situation better. Being nurturing partners, it won’t be long before he asks you how you’re doing or something along those lines – because he’d be too worried without hearing from you after a few days. It’s one of their traits – care.

Do not expect a Cancer man to take it lightly if you lie to him. He’s going to be profoundly heartbroken, and he will ignore you in the process. He won’t come to you for help. He’ll wait until you properly apologize for what you did before he resumes being reasonable with you. It’s not intentional, Cancerians are born to care.

3. His heart is elsewhere. 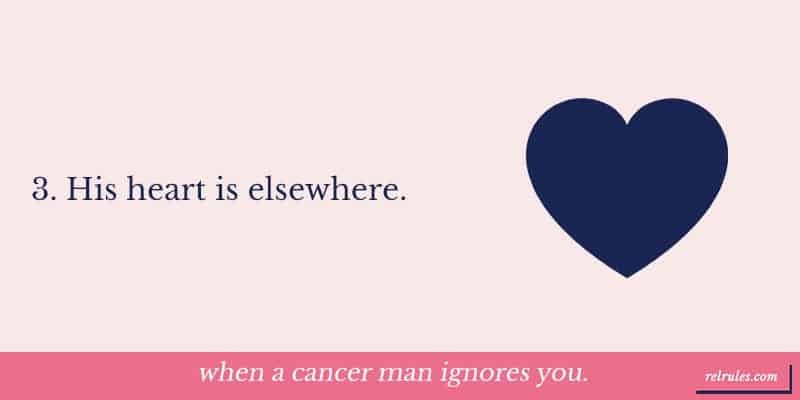 If a Cancer man is interested in someone, even if it’s a far-off crush. He’s not going to give any importance to anyone else romantically. He will pursue the partner he wants because he is a nurturing soul, and he wants to share it with the best person who’s deserving of his infinite care and love. He will ignore you if he doesn’t see a future with you.

4. He’s dealing with his problems.

Cancerians are caring, but they are also super emotional. When they are in a bad situation, their moods will get affected by it. And that may end up causing him to ignore you. Let him deal with his problems, offer to help out if you can. Try your best to be by his side when he’s going through a negative time.

What to do when a Cancer man ignores you?

Care for them. They love caring for people, but they also love it when someone cares for them in return. Think about it, if it’s in your nature to care for others, you won’t be able to find people to care for you. And when you do, you’d do anything for them. The same goes for Cancerians; they will never ignore someone who really and truly cares for them and means it. And if that doesn’t work either, then that means he’s not interested in talking further. In that case, you should walk away and find someone who is on the same wavelength as you are. Always remember, there’s somebody out there who wants to be yours.

Have you been with a Cancer man before? Talk to me in the comments below!

This Is The Real Reason Why Your Zodiac Sign Tells Lies